skip to main | skip to sidebar

As I Lay Dyeing 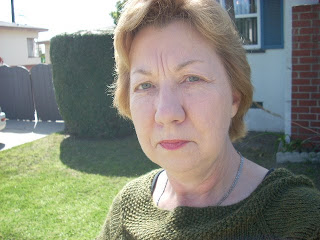 First the old news: I have been working on the top of this top-down sweater (Ingenue, which I ain't!) since August, but I wasn't sure it was working out. I cut the yarn and blocked what I have so far, and at this point it is looking a bit more hopeful. As I was warned, Patons Classic Wool has a tendency to grow quite a bit when it hits water. I did soak and block my swatch, so perhaps I am on the right track after all. Worth pressing on, once the shoulder section dries. 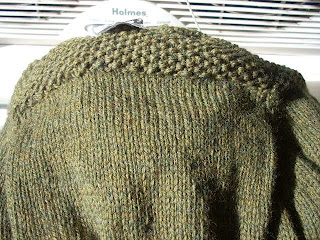 So to amuse myself this morning, I decided I needed to do some Kool-aid dyeing. I had purchased 2 50-gram skeins of 75% wool sock yarn at Let's Knit a week or two ago, marked down to $3 a skein because the skeins were kind of messed up. 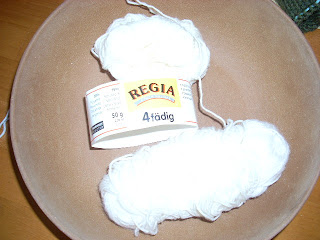 So I wound it into a skein, using one strand from each ball so that whatever pattern I ended up with would be the same in both socks. 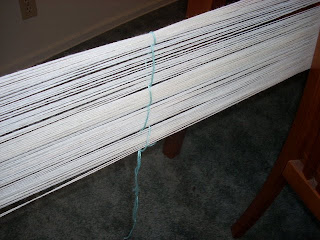 Then as my exercise for the day, I walked over to Ralphs and bought 4 colors (um, flavors) of Kool-aid: 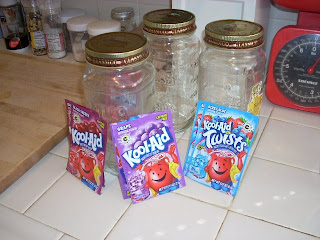 I dissolved the Kool-aid into 3 jars (I used the Grape to top off the jars and kind of deepen the brightness of the Black Cherry, Berry Blue and Strawberry) and put the whole set up in the microwave and nuked it a couple of times. 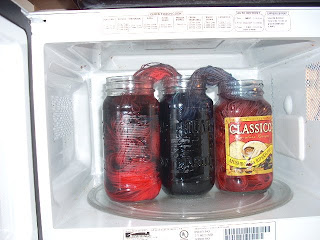 The colors seem to be fairly promising: 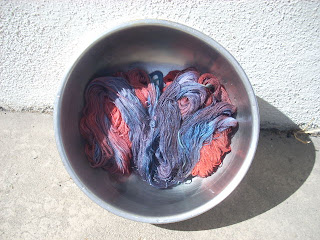 So my yarn is drying on the patio, and I will rewind it into 2 separate but pretty much matching balls, ready to start a pair of socks one of these days. I want to weigh the yarn at the PO to make sure I got the full 100 grams I am supposed to have. (One skein had far less than the other, for some reason, so I evened them out, but yardage may be missing. Hey, it was $6 total.) So I may try the toe-up method, in case the yardage is a little low. Socks that don't come up very high on the ankles are more useful than socks that don't quite reach the toes.... 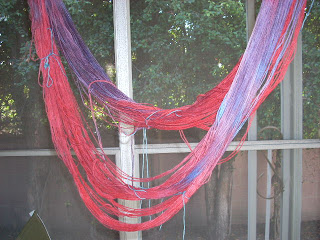 So while my sweater dries and my yarn dries, I still need something to knit!

Luckily, I have some monster knitting to work on. A couple of weeks ago (July?? August??) Beach Knitting had a big sale, all sale yarns $2 a skein. There were 3 skeins of Rowan's Big Wool in a most unappetizing beige color. But hey, it listed at $16 a skein, and I could buy it for $2 a skein, each 100 grams of super chunky a 100% pure wool. Color is no obstacle!So I also bought a jar of Wilton's Food Dye Gel in Leaf Green and back in September, I wound and spit-spliced all three skeins into one continuous skein and dyed it Leaf Green. The beige was no more! 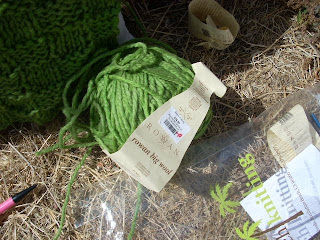 And this yarn was exactly the yarn called for in a pattern that I had been thinking of for quite a while--an oversized Basketweave pattern to use as a cushion cover (from Knitting For Good.) I even had 3 over-sized buttons in my button stash, just right for the look. 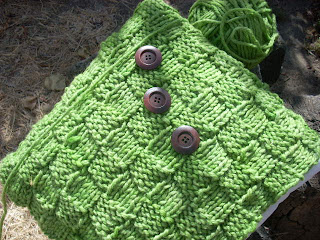 Knitting with size 17 needles is not really as much faster as you might expect, because all the movements are larger and less efficient. The cover is maybe 2/3rds knit. I picked up a 16"pillow form at Joann's yesterday so that I could make sure of the size as I finish it up. Not sure who the lucky recipient of this pillow will be, but it has been a lot of fun to work on. 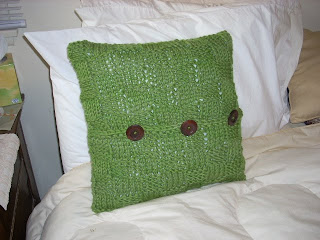 On the sports front, a lightbulb went off in my head this morning that should have gone off years ago. Sam remains a Chicago sports fan, but he can't get the games live on tv. He was planning to follow along on today's Chicago Bears game by watching the online scoring, and he said, yeah, it's almost like listening to the game on the radio. Wait a minute, what did you say? Radio? Maybe you could **listen** to Chicago radio online! And guess what? Sure you can! Live streaming of the local Chicago stations! That means that Cubs games can also be followed on the radio, play by play! How did I never think of this before?? I have known since 2006 that I could listen to WFMT on the computer! I just never put 2 and 2 together (and in my defense, neither did Sam or Kristen.) Anyhow, Sam is now listening to the Bears live on the radio online.

This is a good time to be alive and I don't want to hear from anyone who thinks the internet is making us stupid/isolated/whatever. It's the best thing since movable type!
Posted by Evelyn at 12:21 PM

I liked your comment re: the size 17 needles. I thought I was the only person who had used those! I made a scarf/shawl out of some thick/thin yarn that I didn't like. You're right, it wasn't any faster, but I really like the way the scarf/shawl turned out.